Vole vs. Mouse: What’s the Difference?

Some people find voles and mice adorable. They scurry around with tiny paws, little whiskers, cartoonish ears and innocent-looking faces. Yet, that innocence vanishes once they start causing problems in your home, lawn or garden.

Voles and mice share several other similarities, leading many people to confuse voles and mice with each other. Though knowing the difference between these rodents may seem unnecessary, it is essential for dealing with infestations.

As mice and voles have different appetites, habitats and behaviors, they also respond differently to control measures. Thus, knowing those differences can help you respond to an infestation effectively. Learn more about the differences and similarities between mice and voles.

Are Mice and Voles the Same Species?

Mice and voles are not the same species, but they are both mammals of the rodent order, belonging to the Muroidea superfamily. However, that is as far as their taxonomic similarities go. Voles belong to the Arvicolinae subfamily, along with muskrats and lemmings. In contrast, mice belong to the Murinae subfamily and are relatives of rats and gerbils.

Of those vole species, home and property owners most commonly encounter the meadow vole and pine vole. Red-backed and rock voles primarily live in mountainous regions.

As for mice, the most common species in the Northeastern U.S. are:

The Similarities Between Mice and Voles

How Mice and Voles Differ From Each Other

Despite basic similarities, mice and voles differ in many ways from each other. While each vole and mice species has unique characteristics, general differences between mice and voles also exist. Three avenues to identifying voles and mice are appearance, appetite and habitat.

In general, voles have:

Although voles and mice are relatively similar in size, voles appear rounder and fuller-bodied. They also weigh twice as much as house mice and lack the characteristic pink, hairless tail of house mice. Their round head, beady eyes and tiny ears are more typical of a hamster than a mouse.

In contrast, mice generally have:

Here are some ways the appearances of common mice and vole species in the Northeastern U.S. differ from each other:

One of the best ways of identifying mice or voles is by what they eat. Voles are mainly herbivores, while mice are omnivores. While voles stick to fruits, plants, grains and seeds, mice will eat almost anything. A typical vole diet involves the following foods:

While mice are omnivores, they prefer grains, fruits, seeds and anything high in carbohydrates. However, they will eat anything they find if they are hungry enough. Other food sources that mice eat include:

As omnivores, mice thrive anywhere with food and shelter — inside your walls or in a wooded meadow. In the wild, mice live in:

Voles prefer to stay close to food sources. They don’t eat glue or soap, so they have less reason to stay indoors than mice. They also cannot reproduce indoors. If you find them indoors, they aren’t likely to stick around for long. However, they may linger if they discover enough food supply around your property. You may find them occasionally wandering indoors if they do.

Voles typically burrow 3 to 4 inches underground and establish surface runways through lawns, snow and grassy pastures. They prefer to travel under snow or grassy cover to hide from predators. 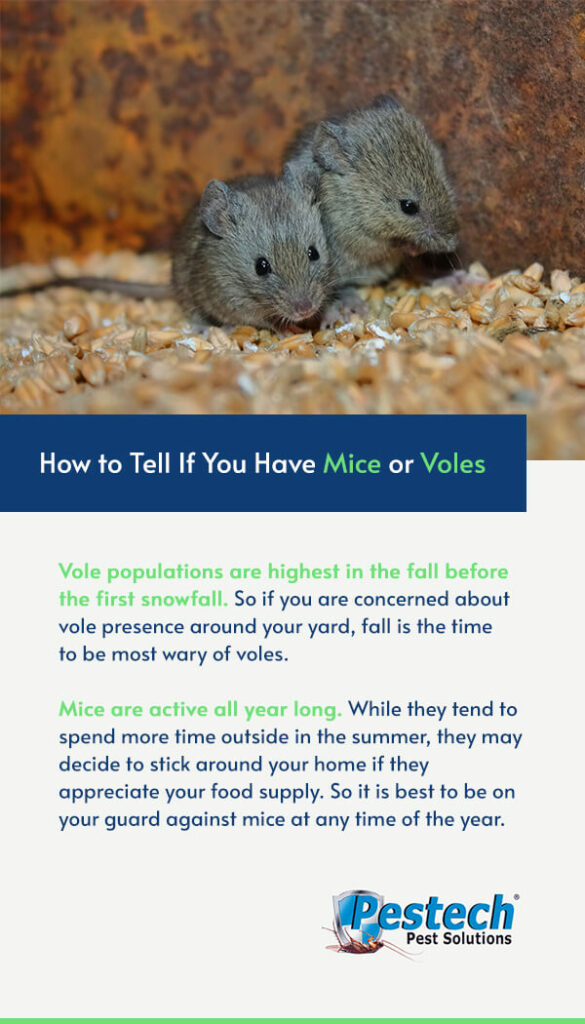 How to Tell If You Have Mice or Voles

Vole populations are highest in the fall before the first snowfall. So if you are concerned about vole presence around your yard, fall is the time to be most wary of voles.

Here are some signs that you may have voles:

Mice are active all year long. While they tend to spend more time outside in the summer, they may decide to stick around your home if they appreciate your food supply. So it is best to be on your guard against mice at any time of the year. Signs you have mice living on your property include:

Problems Caused by Mice and Voles

Voles are less likely to cause damage to your home or building than mice. They prefer to chew on softer vegetation, while mice will gnaw on anything. Thus, voles typically cause problems in gardens and lawns, while mice can cause significant structural damage. Since mice enjoy the indoors more than voles, they are also more likely to contaminate food supplies and other household materials with urine and feces.

Some specific problems caused by mice that home and property owners often encounter include:

Since buildings protect mice from predators, they quickly multiply when they establish nests in or near homes. Effective elimination of an established mice colony often requires professional pest control services.

As for voles, some common problems they may cause around your property include:

How to Take Care of a Mouse Problem

Taking care of a mouse problem is often a joint effort between homeowners and pest control professionals. A pest control company can eliminate a mouse problem once it occurs. However, you can do several things to prevent them from happening and make habitation undesirable for mice, including these tips:

How to Take Care of a Vole Problem

If your vole problem has gotten out of hand, you can always trust the professionals to get the job done cleanly, quickly and effectively. A professional pest control company will have more resources available to eliminate any vole problem you have. Still, you can take steps to prevent vole infestations or minimize their presence. Here are some things you can do to take care of a vole problem:

Call Pestech Today to Deal With Mice and Voles

Whether you have mice or voles or both living in or around your property, Pestech’s pest control professionals can help! Our family-owned and -operated company has provided pest control services to commercial and residential properties throughout New York for over 30 years. We’ve handled numerous pest species throughout that time with unbeatable customer service.

If you notice signs of a vole or mice infestation in or around your home, call Pestech today for an inspection! We will set your mind at rest by either ruling out an infestation or responding to one swiftly and effectively. We won’t rest until we successfully solve your pest problem!