Imagine finding a termite mound as high as 10 feet in your yard. To researchers in northeastern Brazil, this wasn’t part of their imagination, but instead, a real discovery. They found a massive complex of 200 million termite mounds, which may be up to 4,000 years old. As you might gather, termites are rather sophisticated bugs that can survive even if natural predators, like ants, birds and toads, abound.

Part of the reason why termites are so successful is because they live and work in social groups, called colonies. A subterranean termite colony might include several million individuals. Unlike other bugs, such as cockroaches and grasshoppers, social insects, like termites, depend on each other to survive. Each termite performs a specific job that helps the colony as a whole.

Every termite colony is complex and has one or more “headquarters,” usually found in a food source like a log. The colony centers are connected to other food sources by a series of underground tunnels. Worker termites use these tunnels to travel back and forth, and some of them bring food back to their kings and queens. In this chapter, we’ll explore the termite social system further. We’ll also look at the termite life cycle, from tiny termite babies to their mysterious queens.

What Are the Three Castes of Termites?

Each termite colony is composed of individuals that have different physical features or roles, or both. Termite caste systems include three types of individuals: workers, soldiers and reproductives.

If you were to break open an infested piece of wood, you’d most likely find worker termites.

Worker termites are not fully developed reproductively or physically but do most of the work for the colony. They have many duties, such as caring for baby termites, feeding and cleaning other termites, gathering food and building shelter tubes. They get around by using their sense of touch and by communicating with chemicals called pheromones. They use pheromones to help other workers follow trails from the nest to a food source or to warn them of enemies.

Even though there’s much to admire about these hardworking critters, you wouldn’t want to reward them for their effort. Workers are the ones that cause structural damage around the globe and cost homeowners billions of dollars each year.

It’s easy to spot soldier termites in a crowd of workers — just find the ones that look ready for war or have much bigger heads than the others. However, your chance of meeting a soldier is slim. Only about 2 to 4% of termites in a colony are soldiers. You can tell you’ve found a soldier if you see the following characteristics:

Like workers, soldier termites may be male or female and are not fully developed physically or reproductively, but they have a different job to do. As you might expect, soldiers are in charge of defending the colony and protecting workers and reproductives from raiding ants and other intruders. They’ll respond immediately to an attack by excreting poisonous substances. They may also try different tactics to ward off invaders, such as biting their enemies or plugging entrance holes with their heads. In other words, they’ll do whatever it takes to keep their colony safe, and they are naturally built to do so.

Having a weapon for a head obviously isn’t easy. Soldiers rely on workers to feed them regurgitated food as they are unable to feed themselves.

Reproductive termites are sexually mature adults. They’re also called swarmers or alates. Colonies produce swarmers when they get too full or lack food. Once two swarmers mate and successfully start a new colony, they become the king and queen. The king and queen are known as the primary reproductives of a colony, and they are the main ones responsible for mating and laying eggs.

Since reproductives are the only termites that leave their safe underground environment to find mates, they are the only ones exposed to sunlight. This causes them to develop pigmentation and eyes.

You know you’ve spotted reproductives if you notice the following characteristics:

Reproductives shed their wings after they find a mate and prepare to start a new colony.

What Is the Life Cycle of Termites? 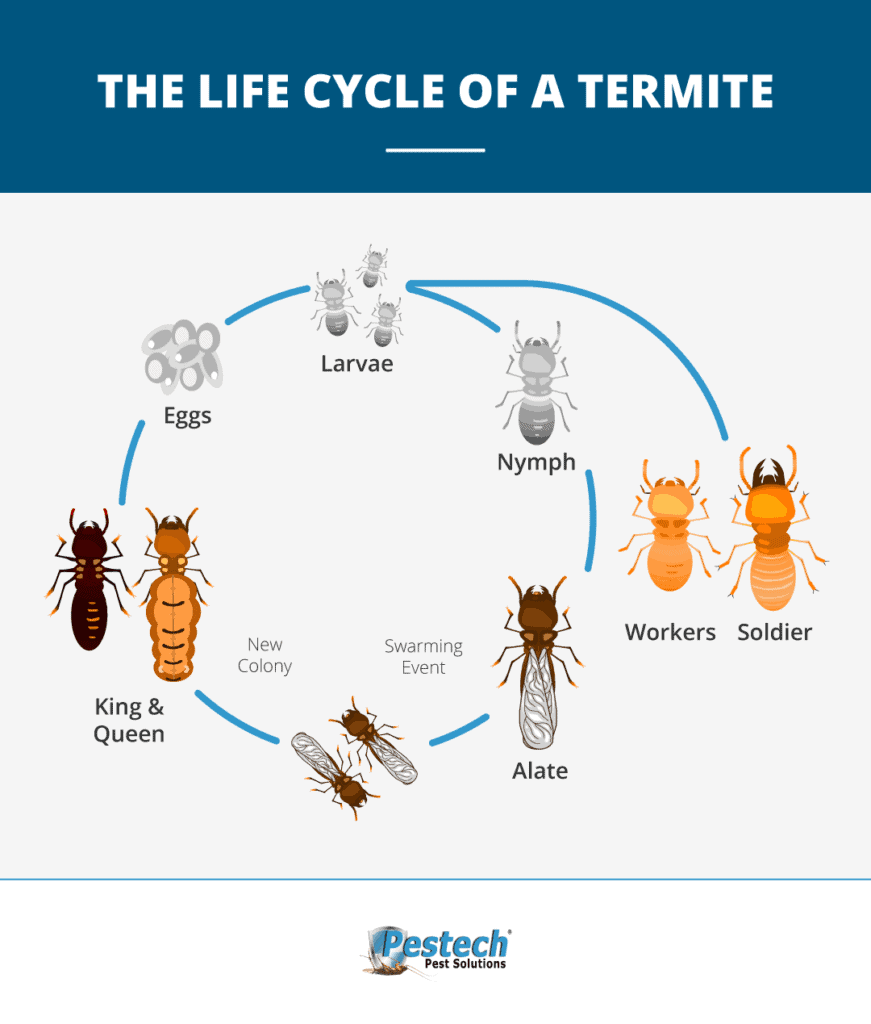 The termite life cycle begins when reproductives fly around and look for mates. However, over 90% of reproductives die during their journey due to predators such as birds, bats and other insects. Those that survive will start a new colony.

The reproductives aren’t very good fliers and will fly a short distance, or only a few yards, from their original colony before they land and chew or scratch off their wings. After they shed their wings, they’ll dig a cell in the ground or piece of wood and mate. This is when the new colony begins.

A termite queen lays 6 to 12 eggs within a few days or weeks after mating. In the United States, most subterranean species lay fewer than 100 eggs during the first year.

Egg-laying increases with time. Eventually, a queen may lay thousands of eggs in a day.

The king and queen take care of their first batch of eggs together. Termite larvae are the termites that just hatched and are small, soft and lack color. Once the termite babies grow into nymphal workers, they take over and care for their younger siblings, the new eggs and the king and queen. Workers make sure the eggs are clean and free from bacteria and fungi from the soil.

The colony grows slowly at first, but as the queen gets older, her capacity to lay more eggs increases and the growth of the colony quickens as a result. As the colony’s size expands, the workers build tunnels that extend farther and farther away from the nest to forage for food.

For the first two weeks of life, termite larvae are fed regurgitated food, which helps them grow into workers, soldiers or more developed nymphs. Most termites will become workers, which, as mentioned previously, are immature termites that cannot reproduce but do most of the work for the colony. A small percentage of these workers will develop into soldiers to keep the colony safe from outside threats.

Occasionally, termite nymphs with wing buds will actually lose their wings and revert back to workers. As you can see, termites are very flexible when it comes to development, and what they become largely depends on what the colony needs at the time.

Most termite workers never develop into adult reproductives, and instead, stay workers their entire lives. Those that do become reproductive adults undergo certain changes. As reproductive nymphs mature, their bodies darken and they develop functional wings and eyes. These swarmers all leave the nest at the same time. After they land and start a den with a mate, the termite life cycle begins again. Overall, the termite life cycle, from egg to nymph to adult, takes a year to complete.

How Long Does It Take for a Termite Colony to Mature?

Subterranean termite colonies mature in about 6 to 7 years. Depending on the species, a six-year-old colony might contain over a million termites and produce winged reproductives each year. Colonies have been known to exist for about 100 years.

How Long Do Termites Live?

Individual worker termites have the shortest lifespans and can live for one to several years. Kings and queens typically live for more than a decade. A queen can live for 35 years.

The type of nest depends on the species. The nests of subterranean termites are just about impossible for amateurs to find because they exist underground. These nests consist of many chambers and tunnels in the soil. Some nests may rise above the ground in little hills while others remain entirely unseen. In general, nests must be warm, dark and damp to provide the conditions termites need to survive. Interestingly, these cozy underground chambers attract other creatures, and nests may be shared with snakes, lizards and various insects.

Subterranean termite nests may reach the wood in a house via mud tubes. Mud tubes may be as wide as a pencil and are usually found on foundation walls. These mud tubes provide a safe shelter for termites as they travel from their underground nest to a house.

Drywood termites live in wood located above the ground and do not need soil to survive. In homes, they love to nest under wooden roof shingles or siding. Dampwood termites also do not need to build nests in the dirt. However, they do require high moisture, so they usually nest in wood that’s buried in the ground.

Mound-building termites, which can be found in Africa and Asia, build large conical or dome-shaped structures above the ground. Some species build mounds as much as 30 feet high, so you wouldn’t have much trouble finding these types of nests.

Termite eggs look like tiny translucent jelly beans. Although they are very small, you’d still be able to see them with a naked eye. However, it’s highly unlikely you’ll encounter termite eggs because they are kept safe in an underground nest.

Where Do Termites Come From?

Subterranean termites come from nests under the ground located next to a food source. Tunnels and mud tubes connect the nests. Since termites, in general, require high moisture to survive, their constant contact with soil helps keep their soft bodies from drying out.

Where Do Termites Swarm?

Termites may swarm inside or outside the house. Typically, swarms emerge from tree stumps and woodpiles in the yard, and this does not necessarily mean the house is infested. If swarms emerge next to the foundation or indoors, it’s likely there’s an infestation.

How Can You Tell the Difference Between a Termite and a Maggot?

Maggots eventually grow into flies, but during their larval stage, they have soft, white bodies like termite nymphs. However, termites have clearly visible heads with antennae and more defined shapes overall. Maggots are tube-shaped and appear not to have heads or legs.

Can Termites Live Without a Queen?

Yes, termites can live without a queen. When a queen or king dies, worker termites can develop into reproductive females or males without going through the winged stage. They are referred to as secondary reproductives. Nymphs can also become secondary reproductives without going through the flying phase, if necessary. Otherwise, without a king or queen to care for, feed and protect, workers don’t have much reason to do what they do best.

While you won’t find a termite queen sitting on a throne wearing a crown, you would still be able to tell her apart from other termites in the colony. First of all, she’s a lot bigger than the others, especially once as her egg-laying capacity expands.

The queen’s transformation starts after she begins to produce babies. The queen’s egg-laying organ, called the ovipositor, will extend significantly throughout her lifetime. This forces her whole body to stretch, and she’ll be as much as a hundred times larger than the other termites. As she stretches, her segments pull apart and show the white membranes of her abdomen. This makes the queen’s body look almost like a striped caterpillar.

Where Can I Find a Queen Termite?

Queen termites, along with their kings, live in chambers in wood or under the ground. After they land and shed their wings, they dig a room in the soil, crawl inside and seal the opening before mating. Generally, this is where they’ll spend the rest of their lives together, though they may relocate if necessary. Therefore, while you might see swarmers taking flight in the spring as they look for mates, it’s doubtful you’ll ever meet the queen.

If you have more questions about termites and how they function, please reach out to us at Pestech Pest Solutions.

Everything You Need to Know About Termites Chapter 3: Signs of Termites
Download the Guide!