Pest Activity in the Winter

Between the icy roads, dry skin and freezing temperatures, there isn’t much to look forward to when snow begins to fall. But there is one thing that many people celebrate at this time of year: A lack of bugs. Just because there are fewer of them out and about, however, doesn’t mean they’re dead and gone.

Many pests seek warmth and food, and when those resources go away in the winter, bugs often migrate to more hospitable places. Others may enter a hibernation-like stage, and some even huddle together for warmth. Not all insects behave the same when the temperatures drop. Regardless of how cold it gets, you can’t neglect pest prevention in the winter. Instead, you may need to adapt it to match new pest activity in the winter.

Is Pest Management Necessary in the Winter Months?

Pest management is absolutely still necessary in winter. When the temperatures drop, the warm interior of buildings provides the perfect escape for insects to scurry inside and take up residence alongside you. They may hide in your walls or hang out underneath cabinets and appliances. Plenty of places inside the home or commercial buildings are perfect nesting spots for pests.

One way to prevent entry in the first place is to seal up any points where pests could enter. We offer a pest exclusion program that enlists the experts to fill in gaps and cracks that pests could use to gain entry.

Pest Activity in the Winter Months

Of course, not all winter pest activity is the same, but before getting into detail, it may help to understand the process of diapause. Many bugs use this state to get through the cold months. It affects them in different ways, but it essentially works like hibernation, lowering the number of resources the creature needs and suspending its development for a period. Often, changes in temperature trigger diapause.

1. What Happens to Ticks in the Winter?

Ticks can be pesky, and their winter habits vary by species. For the most part, ticks do not die off in the winter. The cold weather only takes out about 20% of the population of ticks. Most of them have ways to stay warm. Some will remain active during fall and winter when temperatures are above freezing if they find a warm space to do so, like the backside of a deer. Other ticks will go dormant until spring.

A tick’s movement is dependent on its environment. It will either latch onto a host, which could easily be a human, or find another warm space to go dormant. Some species of tick will burrow deeper into the ground or make dens underneath leaves and tree bark. When snow cover hits, it can actually insulate them and help keep their hideouts warm.

Different species can adapt to temperature changes in unique ways.

2. What Happens to Bed Bugs in the Winter?

Bed bugs can generally survive in temperatures just above freezing. However, they prefer the same climates that we do, making your room an enticing place for a bed bug to set up camp. They can only last in below-freezing temperatures for a few days. With this sensitivity to cold, you may see them migrate indoors more as the mercury starts to drop in the fall. If they’re inside, they may remain active all year long.

During the winter, they can be less likely to move, as they’d rather hunker down than risk hitching a ride somewhere if the temperatures are cold. You may see a lower chance for an infestation at this point. They don’t need much food and can actually live for over a year — 400 days, to be exact — without it, so they can hide out for quite a while in the winter months without moving anywhere.

If they do get into a home, this is a great environment for them. They have a nice warm place to hang out where they can bite you and multiply quickly. Winter clothes and linens also tend to be thicker, providing more space for the bed bugs to hide and reproduce. Plus, the winter holidays can entail lots of travel, which opens you up to the unwanted hitchhikers.

The kind of environments that ticks love tend to be ones that insulate them from cold and keep them away from harsh winds. For instance, they may hide out in luggage or clothing and, of course, beds. These items are usually warm and cozy, perfect for us to carry bed bugs around in and keep them safe, even as we transport them outside.

3. What Happens to Cockroaches in the Winter?

People like to say that cockroaches will outlive humans with their adaptability and ruggedness. Their reputation even says that cockroaches can survive a nuclear war. While they may have superior resistance to radiation, they don’t respond well to the cold. So even if they survive the radiation, a subsequent nuclear winter might not work out so well for them.

These adaptable little critters can keep moving all year round in warm, moist environments. The reason you often see them in kitchens is because they want to be near food and humidity. You’re likely to see significant migrations of cockroaches indoors as the temperature drops. They start to move to warmer locations, including homes and commercial buildings. They can find small entrances like cracks or use pipes and sewers to get inside.

When they get caught in cold temperatures, cockroaches can slow down significantly, and they may group for warmth. The low temperatures may induce diapause, which can:

One factor that can influence a roach’s response to cold is its age and its species. In many types, adult cockroaches will die off in the cold while the nymphs enter diapause. Different species of cockroach will behave differently when the weather gets colder. Below are some of the most common ones that seek shelter indoors in the winter:

4. What Happens to Termites in the Winter?

Termites are known for being hard workers. They are capable of causing severe damage to structures. You might think that they’d take a break in the wintertime, but unfortunately, that’s not the case. Termites can have several different responses to the cold, but they do not hibernate. Most of them rely on finding warm spaces to survive the season.

Termites can survive outside and in.

When a colony reaches maturation, it sends out a particular type of termite called swarmers to find a location for a new colony. This search typically happens in springtime, but any fluctuation in temperature can trigger it. Since indoor temperatures tend to stay pretty much the same, indoor termites are less likely to start swarming in the winter. In springtime, however, the young termites may start swarming and create new colonies within or around the building.

5. What Happens to Spiders in the Winter?

If you see spiders inside in the winter, they’ve probably been there all year long. In fact, only 5% of indoor spiders have ever been outdoors. They don’t typically migrate indoors for warmth like some other insects, but they may end up there for a few different reasons, such as:

Outdoor spiders usually tend to stay outdoors in the wintertime, and the warmth of the indoors isn’t particularly enticing to them.

These outdoor spiders don’t look for warmth but instead enter diapause to hibernate. They usually stay in stacks of leaves or wood. While it puts them into a slowdown state, the spiders are still active and may come out of hiding on warmer days to find food. Many spiders experience a cold-hardening process during diapause, in which they create an antifreeze compound, similar to the one in a car, that lowers the temperature at which they freeze. This antifreeze helps the spiders stay alive in extreme cold, and it takes time for them to build up the compound. That buildup stage means if you find a spider inside, you can’t place it outside without killing it in the suddenly-cold weather.

There is one big exception to the rule that spiders don’t move inside for warmth: the brown recluse. This outdoor spider has a telltale violin-shaped mark on its back and is known for having a very nasty bite if it gets scared — which isn’t too rare with such a skittish species. Bites from a brown recluse can become gaping open wounds, with skin turning purple in the middle, along with other physical symptoms. Be on the lookout for this type if you notice spiders indoors as the temperatures drop.

6. What Happens to Mosquitos in the Winter?

Many people seem to think that mosquitos die in the winter. They’re everywhere in the summer months and then suddenly disappear as the snow falls. It’s not always because the mosquitos died, although sometimes that is the case. Other times it is because they are hibernating to avoid the cold. A mosquito’s response to cold temperatures can vary significantly by species, but they prefer warm weather. Here are a few of the ways mosquitos deal with winter.

7. What Happens to Bees and Wasps in the Winter? 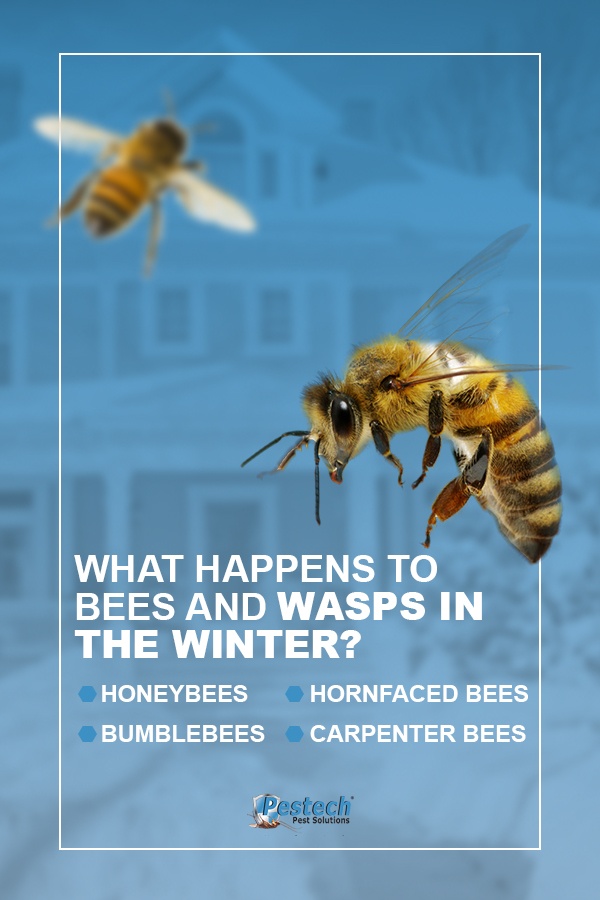 As the temperatures drop and their pollen sources disappear, bees and wasps, like nearly every other insect, have a variety of responses to cold weather that can differ based on their species and their stage of lifecycle development.

As for wasps, many people will be pleased to know that a large number of them do die out in the winter. At the start of fall, mated females find a safe, protected place to hang out for the winter. They typically stay pretty still during this time. Outside of mated females, the rest of the wasp colony dies out. Even the females can struggle to survive the winter with threats of other predators and starvation. Plus, if a winter is unusually mild, queens may emerge before food sources are available and struggle to keep up with being out of diapause.

8. What Happens to Ants in the Winter?

While ants are no strangers when the summer months hit, winter sends many of them underground. Most ants will overwinter outdoors within their colonies and go dormant. Colonies that are indoors or located in mild climates may stay warm enough to be active all winter long. Typically, when the temperatures drop in the fall, the ants will gorge themselves and fatten up. With the extra weight, they can last extended periods without eating. Another thing that happens when it gets colder is the sealing of the colony. The ants close up the entrances, huddle together and hide away to stay warm.

They may create their nests in the following places.

Ants generally will not migrate indoors during the winter, but if their colony is already inside a building, they won’t move out either. They’ll remain active if the temperatures are warm enough.

One type of ant, called the winter ant, will even stay active at low temperatures when other species start to hole up for the season. This kind of activity provides them with less competition. They reside in North America and instead enter diapause throughout the summer.

Prevent Pests During the Winter With Pest Management

As you can see, pests are far from gone in the wintertime. Though their behaviors may change, some insects become even more of a problem when the temperature drops. Many migrate indoors to find the warmth that a heating system offers and the steady food source a kitchen can provide. Don’t make the mistake of thinking that pests are gone just because they aren’t active outside.

One great way to keep the pests outside is by running a proactive Integrated Pest Management program. We can visit your commercial or residential site with a comprehensive solution to your pests and return regularly to keep them at bay. If they’re already present, Pestech offers many removal options for your pest control needs across the state of New York. Reach out to us today for more information on prevention or removal.